skip to main | skip to sidebar
The Matthew Rae Letters have been preserved as part of the John Lunau collection by Markham Public Library. 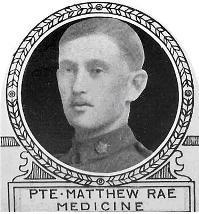 Finally, in September 1917, a letter from the Red Cross in Geneva:
We think, in continuation of our previous letters, that is may be of interest, naturally, to you to know that the grave of Pte. Matthew Rae is numbered 628 in the cemetery at Kortry K.
With renewed expression of sympathy
We are Sir
yours faithfully
Comite Internationale de la Croix Rouge
Geneve
Agence Internationale des Prisonniers de Guerre
British Section
The cemetery where Matthew Rae was buried is now known as Kortrijk (St. Jan) Communal Cemetery in Belgium. The website of the Commonwealth War Graves Commission provides a specific reference to Grave A.56.
Posted by cafelatte at 3:39 PM No comments:

An undated letter was written “from the trenches” in the Middle East came from a nephew of Bessie, who recalled his childhood with Matthew:
Many a time I’ve thought of you all over there in Unionville and especially you and Uncle Frank in your anxiety for Matthews’ safety….As I sit in these trenches, memory carries back to the days when we were boys together….What laughs we used to have together. What subjects we discussed together when we were supposed to be sound asleep in bed at night. What words on [what the] future [would] be and….what we should be some day in the great game of life. What charming girls we were to marry (We had love affairs in days!) and through it all we never thought of war and that not many years hence we should be actors in the greatest tragedy the world has ever known. …..now life can never be the same again….I wish you’d write me with any particulars you have about matters. I can’t realise it fully. Poor chap! He was so big & handsome in that photograph you sent us. My deepest sympathy & prayers are with you both in it all.
My bestest love & all loving sympathy to you & much
Ever your affectionate nephew
Jim
Posted by cafelatte at 3:38 PM No comments:

More information about Matthew’s final days came through letters from a fellow soldier in prison:
It is satisfactory to know the doctors & nurses were kind to him & did everything to aid his recovery, for at one time I felt so afraid he might have been starved, for everyone knows how hard up Germany is for food & of course the prisoners would be the first to suffer. I don’t think Matthew realized he was so ill for this p.c. on Feb. 9th seemed quite bright. I know when I read it I felt so pleased he was getting on so well, altho he did mention he was too ill to be moved. It seems awful for him to lie 4 days before being rescued, probably he would only be half conscious, but it shows what a fine constitution he must have had. I can’t believe Matthew dead, I always felt there might be some mistake, but now when his friend has written that hope is gone.
Posted by cafelatte at 3:38 PM No comments:

Bessie Rae’s sister wrote from Scotland:
My dear Bessie
I feel quite at a loss how express to you & Frank my deepest sympathy. It has been a terrible shock to me & what it must be to you both so far away I can hardly think. It really seems too sad to think how long Matthew has lived & just when everyone thought he was over the worst to succumb to his injuries. He seemed to be getting on so well in his last P.C. dated Feb. 9th when he asked for tinned foods to be sent him. I wonder if had got a chill when being moved to Lahn, or if the journey proved too much for him…..In the back of my mind I always keep thinking there may be some mistake, such things have happened before…..It is a very anxious time just now, the awful strain of war is telling on everyone - when will it be over.
Bessie’s mother wrote on May 21st:
What can I say to you? My heart is just breaking for Frank & you. What a sore sore blow. I cannot help feeling that if the poor boy had been taken on June 2nd how much easier it would have been and he would been spared all these long months of suffering and loneliness that are what I mourn about. What must he have thought at not hearing from us but he never would believe that we were not writing. You have his post cards. Are there only three? I asked him always when writing how his wounds were and if he was able to be out of bed and go about but perhaps he was not allowed to say. He must have written many cards we never got as he said he had asked for money but he was ashamed to ask any more. Oh the poor dear, how gladly we would have sent him money or anything. I wonder if he got any of your letters or cards. He never said…..

I wonder if he thought he was dying?…This time may have been given him for ….preparation…..Matthew was not ours to tell his thoughts and feelings. I just keep saying “Father in thy gracious keeping leave we now our dear own sleeping” Poor Lizzie. My heart goes out to her. How is she bearing up? If they had only been married she would have been a daughter for you…..What a changed world for us all. I do not think there is much fear of us setting our affections on it now…. What mourning there will be at Unionville!
A friend wrote:
This war makes one feel desperate thinking of all the boys who are fighting and dying and suffering such terrible things while we older people remain safely at home. I sometimes wonder what the world will be like when it all over, so many young boys away, so many hearts and homes saddened forever
Bessie’s sister wrote:
We hoped against hope that the news of Matthew’s passing might not be true. Poor boy! What a long and weary time he must have had -- more than nine months. If we could only have done more for him. It has all been so vague and uncertain. Then the cruelty of rubbing out his address and returning Granny’s P.C.’s What are these people made of?….My dear Bessie, I grieve for you and Frank in your terrible sadness when you feel that Matthew died so far away from you, and that you were not permitted to do anything to make his lot easier and happier….Your fine, handsome boy. What a dear wee chappie he was when I first saw him…. One wonders what God’s plan for us all is. What is one to believe amid such an orgy of slaughter and grief?
Posted by cafelatte at 3:37 PM No comments:

During the following months the Rae family worked through the Red Cross to get news of Matthew. In November, a letter came from the Prisoners of War Department of the Canadian Red Cross Society in London, England
I am very sorry to hear that no news has yet come through of Pte. M. Rae, 109558. I hoped that by now his family would have heard from him again even though we had not. I have made special inquiries through the International Red Cross at Geneva. They tell me that they have written to Belgium to try and ascertain the condition of this soldier. Any information concerning him, we will therefore communicate to you as well as to his family in Unionville. This long and continued anxiety must be very hard to bear.
Over the winter months, contact was made – the family received postcards written by Matthew from prison hospital and hoped that he might survive his ordeal as a wounded prisoner of war. But in May 1917 came the news that Matthew had died of his wounds on March 19, 1917, at the age of 24:
Posted by cafelatte at 3:36 PM No comments:

Many friends of the Raes sent letters of sympathy and concern during the period when Matthew’s fate was unknown. These letters provide a glimpse of what it was like to live through these times, waiting for news from a far-away war:
The casualty lists have been so appalling in June that one dreads to pick up the paper.…Sometimes it seems as if it is all dark this time we are living in. War is so cruel, so pitiless. You have often said “The boys are so splendid”. Of course they are and we are truly thankful that they have not shirked their duty. Matthew was one of the very first to step forward.
Then in August came the news that Matthew was alive. A letter from Scotland captures the joy and relief of family and friends:
Believe me we were all crying like children, mother, Mrs. Barbour & I. When we thought of you wasn’t it like getting him back from the dead!? She was good enough to let us add a trifle to her parcel….I think its such a privilege to be allowed to do anything at all for those boys. Especially those who have come so far to the aid of the Motherland.
Posted by cafelatte at 3:36 PM No comments:

Many letters were sent between Unionville and relatives in Scotland. On July 2nd 1916, Matthew’s grandmother, Mrs. Barbour, wrote to her daughter Bessie Rae:
My own darling
What can I say to you. My heart is very sore for Frank & you and you are never out of my thoughts. I got the sad message yesterday morning about 10 o’clock. I have been very very anxious these weeks and was trying to prepare myself for bad news but I found I was not at all prepared. Our poor dear boy if we only heard that he were living we would wait patiently and pray for news. This morning at prayers when I tried to pray for the Prisoners I could not go on. I thought I had our own dear boy suffering with them and how glad I would be to know of him among them. One thing Matthew will bear hardship and discomforts better than most of them….
She then reveals that Matthew had a sweetheart.
“I am thinking too of poor Lizzie! How does she bear up? I would like to write to her but I really do not know if she and Matthew are engaged.”
“Lizzie” was Elizabeth Russell, sister of Jim Russell and a member of the Russell family who in 1914 had built a home at 116 Main Street, just across the road from the Manse where the Raes lived.
“Oh my darling I wish I had you in my arms. Much love to you both from your loving mother …”
Posted by cafelatte at 3:35 PM No comments: